PÃªle-mÃªle off the top of my head:

Shared yesterday:
Who writes about African technology developments? From the list, I follow White African, Afrigadget, and sometimes Google Alert points me to IT News Africa.

Photo processing software for Ubuntu:
I’m currently MacBook-less (there are plans to change this very soon), but in the meantime I’ve installed Ubuntu 8.04 on an Acer Aspire 5920. I tried upgrading to Intrepid Ibex, but I couldn’t get my LAN connection to work. Something to do with the MTU count. And I encountered 2 bugs during the install:

So I went back to Hardy Heron. Cost: most of my Saturday. Learning effect: priceless.

I’ve been scanning the Internet for Linux photo processing software, besides Gimp, Picasa and F-Spot. ‘Cos so far Canon’s DPP has not been ported to Linux. I guess I could use it via Wine. But between you and me, I’m just looking for a good excuse to get a new MacBook. Beyond that DPP (still) lacks a good straightening tool.

I tried BlueMarine ‘cos it sounded promising, but I quickly gave up. Not usable.

There are a couple of commercial tools to consider:

In the end I tried Raw Therapee and downloaded Qtpfsgui for HDRs. Both of which are free and look promising at this stage. BTW, this blog post is good example how I can trick myself into writing a longer text. Initially, I just wanted to write a few Tweet-like text snippets, a summary of various small items circling around in my head. PÃªle-mÃªle off the top of my head.

Please feel free to comment. I would be very grateful for any Ubuntu tips and tricks, etc. 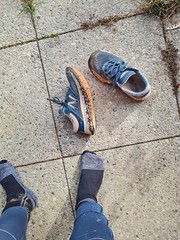