Massimo Rocchi will be performing at the Tabourettli from 11th Jan to 12th Feb.

The CD “äUä” is great… and it was at the same time my first formal introduction to Swiss German, when I was still staying far away from the Swiss German Kantons in southern Switzerland.

I particularly like his observations on language and culture as he compares French, Germans, Swiss and Italians.

I’ll update you on the show. If I get round to going that is… 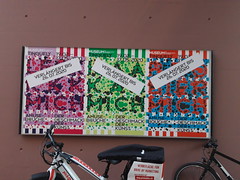